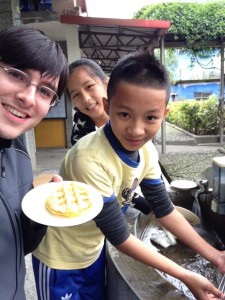 Matthew Werth with two of his students in Taiwan

Studying foreign languages at UD has led me to a lot of places I never expected to visit. It gave me the flexibility, cultural understanding, and language skills to be an effective cultural ambassador and it inspired me to push myself and follow my passion for foreign cultures and languages.

I’ve had the chance to street perform in Ecuador, study tai chi in a monastery, be the only foreigner in a Chinese production of Hairspray, hike thirty miles up and down a mountain while being pursued by monkeys, and, perhaps most importantly, get certified as, “at least moderately attractive or above” during a weekend of modeling in China. Right now I’m in Taiwan teaching English at two rural aboriginal elementary schools as a Fulbright English Teaching Assistant.

Aside from making sure they know Justin Bieber isn’t from the US, one of my main goals has been making English come to life in the classroom and use it to accomplish real tasks. Students have found that learning songs, drawing comic books, and running a mock restaurant simulation have been much more effective than passively learning lists of vocabulary and memorizing grammar rules.

I’m especially proud of a “Guess the American” activity where we showed pictures of people from many different ethnicities and had the students guess which ones were from the United States. Trying to dispel some stereotypes about Americans and celebrate the diversity in the US has been difficult, but also some of the most meaningful work I’ve been able to do.

Often it’s frustrating – I have fifth graders who don’t know the alphabet and fourth graders who stare blankly when asked, “What’s your name?” Whenever I start to get discouraged I try to remember that the goal of language learning isn’t just being able to talk with people in a different language, it’s about learning to put yourself in someone else’s shoes. It’s about seeing the world from another perspective; it’s a step toward becoming a citizen of the world and not just a citizen of one country. More than anything else that I learned from my time at UD, was the discovery of a new way to view and interact with the world around me.