In March 2015, the Department of Languages, Literatures, and Cultures, the Center of Global and Area Studies, and the Jewish Studies program welcomed Mr. Kamal Hachkar, a French film director and a historian, to UD campus. The event was coordinated by Dr. Ali Alalou who invited Kamal Hachkar to present his film documentary Tinghir-Jerusalem and answer questions. 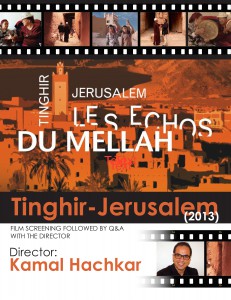 Perhaps what’s particularly interesting about this film is that Mr. Hachkar is not Jewish but Muslim who grow up in France, and yet he seeks to tell the story of Moroccan Jewish roots. In order to do so, Kamal, whose family is from the southern part of Morocco, studied Hebrew to connect with the past of his parents’ little town, Tinghir. Hachkar’s work suggests that he feels a connection and a deep sense of loss at a kind of life a segment of Tinghir’s population lived when his own father was a young man, and which Kamal never experienced. Kamal draws from his own experience as a French Moroccan (un Beur) whose desire is to be at home in many spaces and among many communities of diverse backgrounds.

Kamal strives to understand hybrid identities and dislocated self, a tension that he seems to unpack in this award-winning documentary in order to shed light on the complexities of the human condition. In his documentary, the viewer will witness the complex linguistic shifting and code-switching that permeates the entire documentary. The infusion of French, Hebrew, Amazigh as well as Judeo-Arabic shows the rich cultural heritage that characterized the small town of Tinghir. Hachkar’s search for the fragments of the familiar seems to be encouraging and forward looking rather than disruptive. It is a hopeful tale of the search for a lost neighbor, and perhaps a relative.

This entry was posted in Other, Polyglot, Special Events and tagged Fall 2016 Polyglot, French.