After graduating from UD in May 2016, Rebecca Jaeger (BAFLL Spanish, History, and Biology 2016) and Shane Sanders (MAFLP French 2016) completed one-year Fulbright experiences in Spain and Senegal, respectively. Below you will find their insightful comments on the unique opportunities afforded to them as teachers of English during their time abroad. We congratulate them on the success of their endeavors. 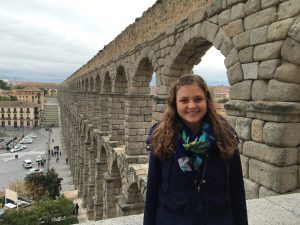 In the middle of our conversation class, a student inquired if he could ask me a question. While I was unsure where it would lead, I agreed. He continued, “Rebecca, what do you think of the American Dream?” To put it simply, I was very surprised. This question had seemingly come out of nowhere and he was genuinely interested in hearing my opinion. I have grown up with the concept of the American Dream, but that was the first time that I had to define what I thought of it. What followed was an insightful discussion into the American Dream and my students’ beliefs about the existence of a “Spanish Dream.” And, all of it was part of a typical Tuesday night for me.

Interactions like this have become a weekly (and a favorite) part of my life. A little over a year ago, I received an email with life changing news: I had been awarded a Fulbright grant to teach English in Spain for an academic year. This was something I never anticipated and it has had a tremendous impact on my life. I was placed at IE (Instituto de Empresa) University with campuses in Madrid and Segovia, where I work with undergraduate students as a writing tutor and lead a conversation class for the university staff.

I have used my conversation class as a place not only to teach my students English and reinforce grammar and pronunciation, but also as a platform to explore similarities and differences between the cultures of the United States and Spain. In the fall, the US presidential election was a hot topic of conversation. I used the election as an opportunity to explain how the electoral system works and to show my students what an American mail-in ballot looks like. They were fascinated to learn that there are, in fact, more than two political parties in the US and were greatly amused by the fact that my county still votes for a sheriff. I unfortunately had to inform my students that the sheriffs in Hunterdon County, New Jersey are not the gun toting, cowboy-hat-wearing sheriffs of Western movies, but they nevertheless thought the concept was hilarious. In class we watched Super Bowl commercials and around every holiday I have talked about my family’s traditions and showed pictures (they had a good laugh at some of my childhood Halloween costumes and were impressed by the spread of food on Thanksgiving). Similarly, I regularly ask my students about their traditions and their perceptions of Spain. We are able to have lively discussions about world affairs, the greatest issues facing our countries, and the meanings of American slang words. (Yes, one class involved me explaining what LOL means).

Teaching this conversation class has had the most profound impact on my experiences in Spain. I have learned that despite differences in ages and native languages, people are quite similar and are generally curious about other ways of life. I have seen that discussions, like the ones in my class, bring up unique aspects of cultures and traditions. This leads to greater mutual understanding, which brings people from different nations closer together. I have learned so much from my students about their lives in Spain, and have relished in the opportunity to teach them English and about my way of life in the US. While I had a tough time defining it at first, I can now say that this Fulbright experience has all been part of my American Dream. 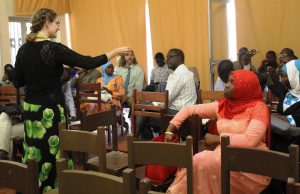 In the midst of my time in the DLLC, I didn’t realize how well the varied experiences I had there would prepare me for a year in Senegal as a Fulbright ETA (English Teaching Assistant). I went into the MAFLP program with a simple desire to become a better language teacher, and while that was certainly the case, the other opportunities afforded to me while I was there did so much more than that! My time at UD not only prepared me for the classroom, but also for engaging with different communities outside of it.

Because of my advanced degree in pedagogy, I was placed at the Senegalese national teacher training college to train English teachers to teach communicatively. While going directly from finishing my masters in pedagogy to actually teaching seemed a bit premature, that is what was asked of me as the Fulbright ETA. Much to their annoyance, I constantly ask my students to justify why they are subjecting their students to a certain grammatical activity or another. When they comment “Ms. Sanders is always asking that why question!” I realize that I sound a bit like everyone’s favorite pedagogy professor… I hope I am doing Dr. Jorge Cubillos’ legacy justice!

While doing my masters I was able to teach French at the 100 level, and those experiences in the classroom helped me better prepare my Senegalese students for their own classroom teaching. Many of the examples of different fun and communicative activities they can use in their classes came from activities I used in my classes at UD; from simple warm-up activities with index cards, to semester-long projects like the reports done on the Tour de France in French 106 which we modified to be a “Great American Road Trip” for the English classroom. The next generation of English teachers in Senegal is changing the way English is taught and I’m proud to be a part of it.

My time in the DLLC also included the opportunity to be a TA for the 2016 Winter Session in Martinique with Mrs. Anna Ogunnaike (French Instructor), an experience that has given me a soft spot for American students studying abroad here in Dakar. I started out living with an amazing family who hosts many Americans coming for short-term study abroad programs. I have had the opportunity to be the “big sister” that helps them make the most of their time in Senegal; sharing what I’ve learned, showing them the best spots, and helping them deal with culture shock and homesickness. I am thankful for the experiences I had with UD students in Martinique that have inspired my engagement with the American student community.

I also have the privilege of working with the internationally-minded Senegalese community through the Public Affairs Section of the US Embassy. After having worked for two summers as a Student Engagement Leader for the YALI Mandela Washington Fellowship at UD, I was motivated to be involved with YALI and similar programs on the other side of the Atlantic. I was able to take part in application screening and pre-departure orientations for both the YALI and ILEP (a program similar to YALI, but for teachers) programs, drawing from my experiences with the fellows at UD to help the new fellows prepare for their own life-changing experiences in the US.

As I consistently draw upon my experiences at UD in my daily life as a Fulbright ETA in Dakar, I am in awe as to how well they prepared me to represent the US as a Fulbright and UD graduate.  I could not be more grateful to everyone at UD and in the DLLC who had an impact on my time there.