Studying abroad is key to successful language learning and cultural comprehension, and in January 2015 twelve students had the opportunity to hone their German skills while spending their winter session in Leipzig, Germany. The program was superbly organized and directed by Dr. Ester Riehl. With great excitement, students witnessed current events unfold as the nearby city of Dresden experienced record-sized anti-immigration demonstrations. When an even bigger demonstration was planned for Leipzig, the language institute decided to send everyone home early. Ensconced in their dorms, the students then watched protesters take to the street, but the anti-immigration camp was greatly outnumbered by counter-demonstrators vocalizing their support for an open society welcoming foreigners. In addition to fieldtrips, including a weekend spent in Berlin, students also learned how to prepare a German meal typical for the region of Leipzig. Cooking Rouladen, bread dumplings and red cabbage, followed by a dessert of homemade ice cream and fresh fruit sauce made for a fun evening! 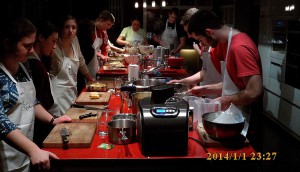