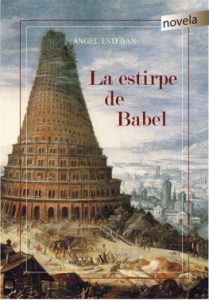 Dr. Ángel Esteban, La estirpe de Babel. (Madrid: Verbum, 2016). On the same day that Palim VI turns 15, there is a universal upset of the languages in Babel’s Tower. The young man, attracted by the musicality of the languages, tries to interpret what his own father and many others involved in the chaos are vocalizing. When he discovers that he is immortal during the fire of the Library of Babylon, he infers that his destiny will be tied to literature. He will travel with Virgil from Naples to Rome; will run into Cervantes in a Sevillian prison the year that the author conceives the idea for the Quixote; he will teach Hebrew to Kafka just as Hitler begins his political career; and he will come the aid of a drunken, depressed, and irresponsible Faulkner after he has finished writing The Sound and the Fury. Thirteen encounters with thirteen great geniuses cause Palim VI to feel richer each day even though he lacks stable relationships, roots, and material possessions.

This entry was posted in Books Published, Polyglot and tagged Fall 2017 Polyglot, Spanish.