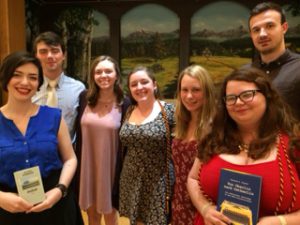 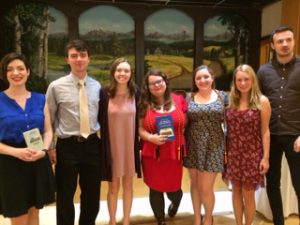 In October 1517, Martin Luther famously nailed his 95 Theses to the door of the castle church in Wittenberg, Germany and 2017 thus marks 500 years of reformation, which is commemorated all over Germany. Dr. James M. Brophy, Francis H. Squire Professor of History in the Department of History at the UD  presented a talk at the annual German Honor Society, Delta Phi Alpha celebration fittingly entitled “Luther’s Bible: Mighty Words for German Culture?”. Dr Brophy eloquently described Luther’s seminal contribution to the development of the German language and explaining its rich linguistic and cultural traditions. Dr. Brophy also emphasized that our German students now have the skills to participate in and continue this tradition. His talk was a powerful message of how learning another language can sharpen our thinking and enrich our lives.

The students we celebrated at the Delta Phi Alpha event held in early May have learned this lesson well and the faculty proudly honored their accomplishments. Seven new students were inducted into Delta Phi Alpha. Andrew Jackson, currently a junior, majoring in German and minoring in linguistics was awarded the Sepp Hilsenrad Memorial Award, which acknowledges outstanding work at the advanced level. Given annually by the Delaware Saengerbund and Library Association, our host of the evening, Andrew received a check in the amount of $1,000. We also honored Rachel Smith, the recipient of the Marion E. Wiley Memorial Award, which recognizes the accomplishments of a non-major student in German beyond the intermediate level. A special feature of the Wiley Award is that the student’s name is inscribed on a plaque, which hangs in the departmental office. Phoebe Hertler, Nathan Springer, and Julie Tilley, were the recipients of the 2017 Fulda Awards, comprehensive scholarships for the international summer language program held at the Fachhochschule Fulda. Those three are brimming with excitement about spending their summer in Germany where they will improve their language skills while making friends with students from all over the world. The annual Honor Ceremony also featured a tribute to the graduating seniors deftly delivered by Dr. Ester Riehl. We take great pride in the accomplishments of our seniors and were thrilled to learn that one of them Carly Maylath was recently inducted into the prestigious honor society, Phi Beta Kappa.

We concluded the academic year with a fun picnic at a local park. Faculty and students sampled German foods, played games, and enjoyed each other’s company. It was a great way to end the semester and celebrate our community of learners and teachers.

This entry was posted in Polyglot, Student Awards and tagged Fall 2017 Polyglot, German.