Our featured graduate and undergraduate students, Kevin Murphy and Kyla Dickens, discuss how study abroad impacted their journeys to language learning, literary and cultural appreciation, and how they have shared their experiences with others.

My Journey with Languages and Literature 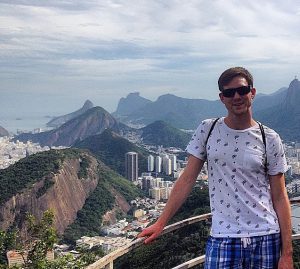 Have you ever felt like you needed to just get away? I’m sure you have. We all feel overwhelmed at times, and most people develop coping mechanisms that reduce the stresses of academic, professional or family life. One of my favorite coping mechanisms is reading literature, especially from Latin America. You might be thinking: “What?! You actually like to read? I have so much reading to do for my classes that the last thing I want to do in my free time is read!” Well, I understand your point of view. Actually, I felt like that for a long time, but let me tell you how literature came to be an outlet for stress instead of a source of stress in my life.

I started studying Spanish as an eighth-grader in a US public school. Spanish immediately became my favorite subject after learning just the alphabet and some basic greetings during the first class. For some people, hearing phrases in a language they don’t understand just sounds like useless gibberish. For me, on the other hand, I was instantly mesmerized by the flamboyant nature of Spanish pronunciation. Hearing the teacher roll the “r” in carro and pronounce the “j” from the back of her throat in José was an experience that left me grinning from ear to ear. Like many young boys who gasp when they get excited or put their hand on their hip when they’re waiting in the cafeteria line, I felt constant pressure from my classmates to “act like a man.” That pressure didn’t exist in Spanish class. The stronger I rolled my “r’s” and the more I exaggerated my vowel sounds, the better.

My love-at-first-listen romance with Spanish lasted all the way through high school and into college, where I decided to major in Spanish and Education. What I learned to love about literature is that it contains universal themes that absolutely anyone can relate to on some level. My favorite books were those that dealt with human rights issues. Some examples are Aves sin nido, by Clorinda Matto de Turner, which sheds light on the situation of indigenous communities in South America; Sab, by Gertrudis Gómez de Avellaneda, which deals with slavery and racism; as well as Adiós a mamá, by Reinaldo Arenas, which is a collection of short stories that offer insights on the repression of human sexuality and life in exile.

I have always developed a personal relationship with characters when I read their stories. These relationships motivated me to go out and explore the Spanish and Portuguese-speaking world. I studied abroad in the Basque Country, a region of northern Spain in the summer of 2010, and after graduation in 2011, I moved to São Paulo, Brazil to teach English. I ended up living in Brazil for almost four years and had the opportunity to travel to Argentina, Bolivia, Colombia, Peru, Portugal, and Spain. As I visited each country, I thought about the literary characters I had already met from my couch back home, and they guided me to understand each culture in a way that wouldn’t have been possible just by visiting museums and monuments. After four years in South America, I’m back in the United States pursuing my MA in Spanish and Latin American Literature at UD.

You can see that languages and literature have taken me places I never imagined as an eighth-grader in Spanish class. At first, Spanish offered me a way to express my more vibrant side without fear of bullying. Eventually, I learned how to read and comprehend novels in Spanish, which gave me the opportunity to understand myself and others through the characters I read about. To wrap up, the next time you feel overwhelmed or stressed, why not learn some phrases in a foreign language or pick up a book and start reading? You never know where that first step will take you. 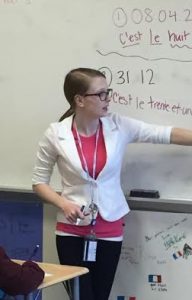 The benefits of study abroad programs for students of all majors abound, but especially for students of language. As a French Education major, study abroad experience was not only recommended but required, so I applied for the semester program in Paris to start off my junior year. I knew that studying abroad would increase my language proficiency and help me build the cultural knowledge necessary to pass the exams required for certification, such as the Oral Proficiency Interview and the Praxis World Language exam. But how would studying abroad help me become a better teacher? As I was preparing to start my experience as a Student Teacher at Alfred G. Waters Middle School, this question was weighing heavily on my mind.

The first day of the third marking period was my first day as a teacher. The plan for the day: introduce myself to the students in French using a Prezi and ask them what language comprehension strategies they used. I would then go over a “Useful Expressions” worksheet I had prepared so that they would understand simple commands such as “repeat” and “work in partners” in French. I started class with “Bonjour classe, ça va bien?” and a student called out almost immediately, “How are we supposed to understand you if we don’t speak any French?” In that moment, the first image that came to mind was the night I tried to order dinner in Munich. I spoke three words of German at the time: “hello,” “no,” and “thank you.” No one working at the pizza shop spoke English. Somehow, though, I still managed to eat dinner; I do not remember how I communicated that I needed the plainest type of pizza they had, but I did eat dinner.

As I thought about that student’s question throughout the days that followed, I was reminded that I experienced a communicative disadvantage not only when I traveled outside France to countries where I did not speak the native language, but also when I was in France communicating with native speakers of French. Even though I had been practicing the language for years, after the Welcome Dinner for my group on our first night out in Paris, I found myself alone at the metro station unsure of how to get home because of some construction work that was rerouting trains. I had to use my meager French skills to ask the attendant how to get home, and I was terrified. The seemingly simple question turned out to be a lot more difficult to answer than I thought, but I rode the train home feeling confident that night. The attendant had been patient and seemed truly committed to understanding my message and to assisting me in understanding his.

I remind myself of that night every day. I think of how anxious I felt about speaking a language I had been learning for years, and I think about how the attendant put me at ease. Then, I remind myself that my students have just begun to learn French, and I try to be that metro attendant for my students: patient and committed to helping them “get home.” I remind myself of that moment when I’m trying to teach in the target language and modeling an activity for the fourth time, and when I’m waiting for a student to search through their notes for the phrase they want to answer my question. Those moments, I have found, are how studying abroad has helped me to become a better teacher. There is no doubt that study abroad increases students’ communication skills in their native and secondary languages, but experiencing linguistic difficulties abroad has also helped me to develop the patience and commitment to teaching language skills that my students need in the classroom. And for that, I am forever indebted to my semester abroad in Paris.