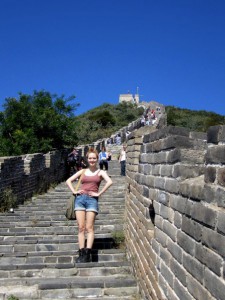 Courtney Olsen during her travels in China

Three months after college ended, I woke up yet again far from home. This time, China captivated my present. Following graduation, I decided to really learn this tricky language called Mandarin and committed to a year teaching English in Shanghai. What a formative year it turned out to be, full of long nights spent studying and early days trying to convince five-year-olds that I, a foreigner, had something interesting to say.

My apartment and school stood walking-distance apart in a district called Xujiahui. Each morning I passed through a mélange of stinky tofu smells and baozi steam while walking to work, a sensory experience frequent in my Chinese life. I quickly settled into a comfortable routine, befriending local vegetable vendors and discovering the best Muslim noodle restaurant in the world’s largest city. I even made quite a few friends who helped me with my Chinese fluency and introduced me to Shanghai staples: KTV (karaoke “box” establishments) and soup dumplings.

During the Chinese New Year celebrations, I was fortunate enough to have a month off school to travel. Some fellow teachers and I journeyed to Southeast Asia for some spicy food and hot weather. Motorcycle rides, temple tours, and jungle trekking were a few of the many activities marking this experience. Other parts of China were also subject to exploration, from the Terracotta Warriors to the Great Wall. I avidly consumed as much Chinese culture as I could encounter. Hong Kong, though, stuck out more than the other adventures, a place that reminded me of my true home, New York. Huge skyscrapers sharply illuminated the harbor, as Hong Kong has no light pollution guidelines. The population seemed so diverse in comparison to mainland cities, consistently peppered with people of varying backgrounds.

Finishing up the year in China, I passed the HSK Level 4, a Chinese proficiency exam, took a last glance at sycamore lined streets, and considered staying longer. But I needed cheese, and I needed New York.

After returning to the US, I immediately moved to Brooklyn, and started writing grants at PEN American Center and scripts for a foreign/domestic policy documentarian. Now I find myself at Rainforest Alliance, an international nonprofit striving to enforce sustainable business and consumer practices. However, my fascination with China remains strong, and I plan to take an advanced Chinese oral proficiency exam this fall to complete applications for China-centric MBA programs. As someone who used to fear flying immensely, I appreciate the ability to change, for I would not have enjoyed such an enriching year without learning a language and without letting fear go.

This entry was posted in Alumni Column, Polyglot and tagged Chinese, Fall 2015 Polyglot.