Distinguished Scholar Dr. Marina Brownlee on “The Afterlives of Cervantes on the English Stage” 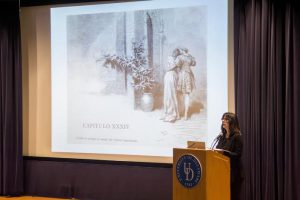 On May 5, 2016, Dr. Marina Brownlee, Robert Schirmer Professor of Spanish and Portuguese Languages and Cultures and Comparative Literature, Princeton University gave a riveting lecture on “The Afterlives of Cervantes on the English Stage.” In her talk, Dr. Brownlee argued that in the century of its publication, El ingenioso Hidalgo, Don Quijote de la Mancha (1605, 1615) fascinated not only Spain, but all of Europe. Multiple translations and adaptations of Cervantes’ famous work emerged in the seventeenth century. In this context, she argued that England was a stunning case in point, producing a number of very diverse plays based on a wealth of episodes from the Quijote. Dr. Brownlee’s talk examined three intriguing English theatrical adaptations of one especially provocative Cervantine episode: La novela del curioso impertinente (The novel of the curious impertinent), comparing the original to the English adaptations of Thomas Middleton, Aphra Behn, and Thomas Southerne. 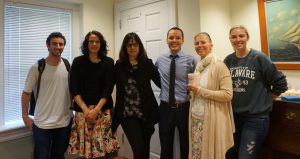