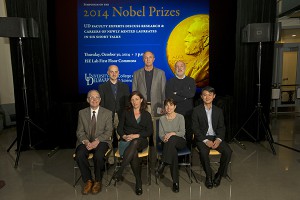 Drs. Bruno Thibault and Deborah Steinberger with the other participants of the 2014 Nobel Prizewinners Annual Symposium
Photo by Duane Perry

Seven UD faculty members with expertise in each of the six areas of study that won this year’s Nobel Prizes discussed the significance of the winners’ work at an October 2014 public event, held appropriately in the Interdisciplinary Science and Engineering Laboratory (ISE Lab) on campus.

“This year, the prizes are remarkably interdisciplinary,” said Doug Doren, senior associate dean of the College of Arts and Sciences, who organized the annual Nobel Symposium. “Our faculty speakers do research in areas that are closely connected to the work being recognized, and they bring their personal insights to the talks,” he said.

Dr. Bruno Thibault, Professor of French in the Department of Languages, Literatures and Cultures, discussed French novelist Patrick Modiano, who won the literature prize for what the Nobel Committee stated was “the art of memory with which he has evoked the most ungraspable human destinies and uncovered the life-world of the occupation.”

Dr. Thibault said that Modiano, whose father was a Nazi collaborator during the German occupation of France, has written some thirty novels, almost all focused on the World War II period and on similar themes of identity and memory. He described Modiano’s first novel, La place de l’étoile, which was the start of a trilogy, as “rather disturbing” and as “a dark and grotesque farce.”

Modiano’s work has won numerous literary awards and is extremely popular in France, although few of his novels have been translated into English, Dr. Thibault noted. The best-known of his books in English is probably Out of the Dark, Dr. Thibault said, the story of a detective with amnesia. Modiano also wrote the screenplay for the Louis Malle film Lacombe Lucien.

At the conclusion of Dr. Thibault’s talk, Dr. Deborah Steinberger, Associate Professor of French, read a passage from Dora Bruder, a novel in which Modiano relied on the true story of a Jewish teenager in Paris who became a victim of the Holocaust.

Article adapted from a UDaily piece

This entry was posted in Other, Polyglot, Special Events and tagged Fall 2015 Polyglot, French.