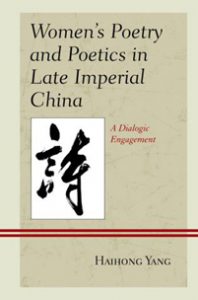 Published in May 2017, Women’s Poetry and Poetics in Late Imperial China explores poetic forms in which women wrote, and investigates poetic devices which women innovatively employed to create agency and negotiate their literary, social, and political concerns. It recognizes the contributions of women-authored poems and criticism to the construction and evolution of a distinct women’s poetic tradition in dynastic China. It argues that gentry-class women used lyric poetry and poetic criticism as an important venue to engage themselves in the construction and modification of important discourses, be they cultural, social, or political. In this book, Dr. Yang endeavors to re-chart a literary landscape which is inclusive, rather than exclusive, a landscape where different poetic aesthetics are mutually informative and generative. The book examines the interactions between women’s poetic creations and existing discourses in the literati tradition, and study how these interactions generate innovative self-re-inscription and renovations in poetic forms and aesthetics. Women, just like their literati counterparts, wrote within the vast and heterogeneous literati tradition. At the same time, they also wrote beyond. The tension between women’s act of writing and self-reinscription on one hand, and the cultural and social limitations on their writing contexts on the other, results in a discernible women’s writing tradition, a heterogeneous and protein process of construction instead of a stable and static “being.”

Dr. Yang adopts a dialogic approach to women-authored poems and poetics. This approach allows us to better understand women writers and their works through their interaction with others writers past and future, and avoid gynocentric and essentialist traps while re-introducing women and their works into the literary history. It enables us to historicize our reading of women’s poetry and poetics in their social, cultural, and political contexts, and thus base our reading of the original materials on both their presence and absence from certain dialogues. It is not only contingent on our comprehension of the genres of lyric poetry and poetics, but in return, expands and deepens it.

This book conducts a close reading of selected works and theoretical analysis of these works. It historicizes its reading of these works and examines them in their interactions with their literary and cultural contexts. It appeals to scholars and college students in the field of gender studies, Asian studies, Chinese literature and literary history. General audience who are interested in classical Chinese literature and culture will also enjoy discovering and reading the poetic creations by women writers on topics varying from the pleasure of appreciating a snow-woman, a quiet moment when the poet reflects upon her life, to reunion with the writer’s female friends and her comments on current political and cultural issues.

This book joined in recent scholarly efforts in re-reading, re-assessing, and re-representing women authored poetry and poetics in late imperial China as artistic creations. In a recent review published in Tulsa Studies of Women’s Literature, the book is praised as “thought-provoking and represents a valuable addition to the existing scholarship on women’s poetry in pre-modern China.” I hope that my readers will share the excitement in bringing these writers and their works from the literal “sub-consciousness” to the “consciousness,” and reflecting on their impact on our relations with the past and our cultural roles in this digital era when the past is increasingly distanced and yet has never been so earnestly needed and sought after.

This entry was posted in Books Published, Polyglot and tagged Chinese, Fall 2018 Polyglot.