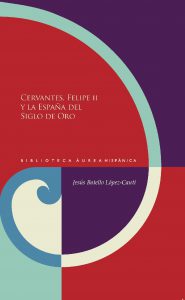 Dr. Jesús Botello.  Cervantes, Felipe II y la España del Siglo de Oro (Madrid: Iberoamericana Vervuert, 2016). In his monograph, Dr. Botello examines how Philip II’s strategic priorities and his decision-making style influenced Cervantes’s Don Quijote in concrete and meaningful ways. The monarch’s emphasis on written communication, the messianic character of his kingship, and his obsession with collecting (particularly relics) serve to critically reevaluate Cervantes’s masterpiece. Dr. Botello argues that Don Quixote’s obsession with books of chivalry and his faith in the written word can be read as a subtle criticism towards the process of bureaucratization of Spain that peaked during the reign of “The Prudent King.” Dr. Botello also studies the opposing way of communication in Don Quijote, through the spoken word. He examines how the illiterate Sancho Panza and his good judgment in Barataria represent Cervantes’s idealization of the spoken word, and his desire to return to a utopian Golden Age based on orality. Finally, Dr. Botello compares the space of the cave of Montesinos in the second part of the novel and the monastery of the Escorial. He suggests that in this episode Cervantes is parodying Philip II’s vast collection of relics in the Escorial, as well as creating his own literary Wunderkammer (cabinet of curiosities), as an attempt to emulate and compete with the royal collections installed by Philip II in the Escorial. Cervantes, Felipe II y la España del Siglo de Oro is the first book that studies the impact of Philip II’s policies on Cervantes’ novel.

This entry was posted in Books Published, Polyglot and tagged Fall 2017 Polyglot, Spanish.