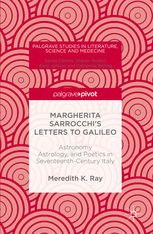 Dr. Meredith Ray,  Margherita Sarrocchi’s Letters to Galileo: Astronomy, Astrology and Poetics in Seventeenth-Century Italy (London: Palgrave Macmillan, 2016). This work examines a pivotal moment in the history of science and women’s place in it. Ray offers the first in-depth study and complete English translation of this fascinating correspondence, which reveals the complex intersections of scientific and literary concerns among early modern intellectual communities. Sarrocchi (1560-1617), a polymath and author of the epic poem Scanderbeide, was also a natural philosopher, a member of a well-known salon in Rome, and an important ally of Galileo at the dawn of the Scientific Revolution. Their correspondence, undertaken soon after the publication of Galileo’s Starry Messenger, reveals how Sarrocchi approached Galileo for his help revising her poem; offering, in return, her endorsement of his recent telescopic discoveries. Situated against the vibrant and often contentious backdrop of early modern intellectual and academic culture, their letters illustrate, in miniature, that the Scientific Revolution was, in fact, the product of a long evolution with roots in the deep connections between literary and scientific exchanges.