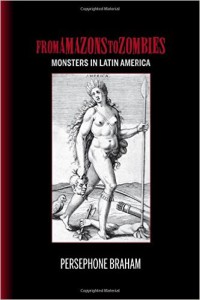 Dr. Persephone Braham, From Amazons to Zombies: Monsters in Latin America (Bucknell Studies in Latin American Literature and Theory, 2015). How did it happen that whole regions of Latin America – Amazonia, Patagonia, the Caribbean – are named for monstrous races of women warriors, big-footed giants and cannibals? Through history, monsters inhabit human imaginings of discovery and creation, and also degeneration, chaos, and death. Latin America’s most dynamic monsters can be traced to archetypes that are found in virtually all of the world’s sacred traditions, but only in Latin America did Amazons, cannibals, zombies, and other monsters become enduring symbols of regional history, character, and identity. From Amazons to Zombies presents a comprehensive account of the qualities of monstrosity, the ways in which monsters function within and among cultures, and theories and genres of the monstrous. It describes the genesis and evolution of monsters in the construction and representation of Latin America from the Ancient world and early modern Iberia to the present.