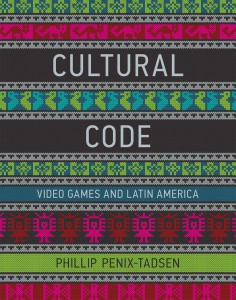 Dr. Phillip Penix-Tadsen, Cultural Code: Video Games and Latin America (Cambridge: MIT Press, 2016). Video games are becoming an ever more ubiquitous element of daily life, played by millions on devices that range from smart phones to desktop computers. An examination of this phenomenon reveals that video games are increasingly being converted into cultural currency. For video game designers, culture is a resource that can be incorporated into games; for players, local gaming practices and specific social contexts can affect their playing experiences. In Cultural Code, Phillip Penix-Tadsen shows how culture uses games and how games use culture, looking at examples related to Latin America. Both static code and subjective play have been shown to contribute to the meaning of games; Penix-Tadsen introduces culture as a third level of creating meaning. Cultural Code brings together the critical vocabularies of game studies and Latin American studies to offer a synthetic theorization of the relationship between video games and culture, based on analysis of both in-game cultural representation and the real-life economic, political and social impact of games.