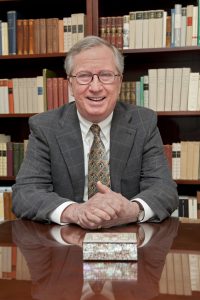 Richard Zipser, Chairperson of Foreign Language & Literatures, photographed in his office for the Polyglots newsletter.

In April 2018, Prof. Emeritus of German Richard Zipser was honored to accept an invitation to become a member of the International PEN Centre of German-Speaking Authors Abroad.  PEN International promotes literature and freedom of expression.  Founded in the UK in 1921, this global community of writers now spans more than 100 countries.

The PEN Centre of German-Speaking Writers Abroad was founded in 1934 by four already emigrated German writers:  Lion Feuchtwanger, Ernst Toller, Rudolf Olden and Max Hermann-Neiβe as the German PEN Club in Exile.  It soon brought together the most important German authors and represented the persecuted and oppositional literature of the “other Germany”.

After World War II, the Centre continued its activities, as many of its members at that time decided not to return to Germany or left Germany once again.  Following the fall of the Berlin Wall in 1989, the Centre offered a number of East German writers who did not want to join the reunited German PEN an intellectual home.

In addition to keeping alive remembrance of the lives and works of its earlier members, the Centre also considers its main objective to be supporting writers today who have been persecuted, exiled or silenced.

This entry was posted in Grants/Awards, Polyglot and tagged Fall 2018 Polyglot, German.