Dr. Richard A. Zipser, who recently retired from the University of Delaware as Professor and chair of the former Foreign Languages and Literatures Department, received the College of Arts and Sciences 2014 Lifetime Service Award. 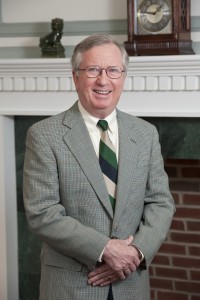 Dean George Watson, who presented CAS faculty awards for excellence in scholarship, teaching, service and advising at the college’s annual Celebrating Achievement and Success event in May, postponed announcing the Lifetime Service Award at that time. Instead, he made the presentation at a ceremony later in the month that was held to honor Dr. Zipser’s career.

“I can’t think of anyone more deserving of a college lifetime service award than Richard Zipser, who chaired the Department of Foreign Languages and Literatures –one  of the largest in the University –for  twenty-seven years,” Dr. Ferguson said. The Department also honored his retirement by naming the conference room in Jastak-Burgess Hall after Dr. Zipser.

Dr. Zipser earned his doctorate from Johns Hopkins University in 1972 and then served on the faculty of Oberlin College until 1986, when he came to UD as a Professor of German and Department chair. He has received numerous awards from the University and from Delaware education officials and has served in such capacities as CAS special adviser for international affairs and acting associate provost for international programs and special sessions.

This entry was posted in Noteworthy, Polyglot and tagged Fall 2015 Polyglot, German.