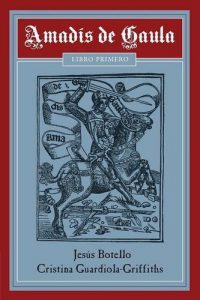 Drs. Jesús Botello and Cristina Guardiola, Amadís de Gaula, Libro Primero (Newark: Juan de la Cuesta—Hispanic monographs 2016).  Amadís de Gaula is a beautiful tale of the chivalric exploits of the legendary knight, Amadís. It is also the best and most famous example of the literary genre of the Libros de caballerías (books of chivalry) in Spain. It would be difficult to exaggerate the popularity and diffusion of Amadís de Gaula. An authentic Golden Age best-seller, this work was read by all social classes, from aristocrats and kings to peasants without any formal education at all. It was also the work with the most number of editions (at least nineteen in Spanish) and as such it established the literary paradigm upon which the chivalric genre was built in Spain and throughout Europe. Its subject soon inspired the creation of ballads, romances, and plays, and it was translated into French, English, Italian, German, Dutch, and Hebrew, which demonstrates an unprecedented editorial success in the panorama of European literature. More importantly, Amadís is the principal model upon which Don Quijote builds his identity, and various adventures of Don Quijote are burlesque rewritings of specific episodes of Amadís. As Don Quijote says: “Amadís was the polestar, the morning star, the sun to valiant, enamored knights, the one who should be imitated by all of us who serve under the banner of love and chivalry.” But perhaps the episode that best demonstrates Cervantes’ recognition for Montalvo’s work is that of the careful examination of the library of Don Quijote. The priest and the barber take on the task of purging the library of Don Quijote’s house, and Amadís is the first book to be examined and one of the few that is saved from being burned for being “the best of all the books of this kind ever written.” Cervantes, through the words of the barber, is expressing his admiration for this work. The Spanish writer was right: without any doubt, Amadís the Gaula is a timeless masterpiece of chivalric literature.