ECCE HOMO (This is a Human) Human Rights Symposium at UD

In this historical moment charged with humanitarian crises and xenophobic nationalism, the DLLC hosted a four-day symposium on ethics, engagement and human rights in April, 2017. The principal theme of the symposium was learning from the past to combat present and future atrocity. The event opened with a keynote address by activist and author Dr. Cornel West of Harvard University entitled, “Justice Matters: What Love Looks Like in Public.” 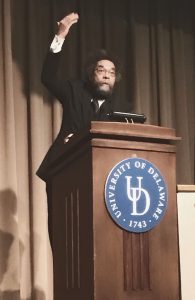 The provocative keynote was followed by a screening of the award-winning documentary Fire at Sea. Filmmaker Luca Giberti offered and introduction and commentary on the film about the Sicilian island of Lampedusa, a port of call for hundreds of thousands of African and Middle Eastern migrants. The next two days featured experts in the field of human rights, who fostered a lively dialogue between academics, the public, and the broader University community. Areas of focus were: Human Rights in Antiquity, Lessons from the Holocaust, A Middle East in Crisis and the Failure of Ethics, and Human Rights in Latin America. 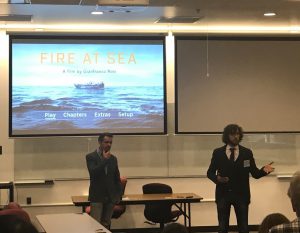 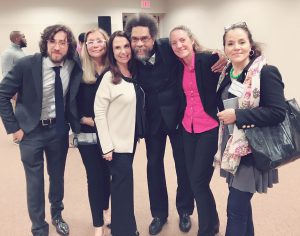 Here are descriptions of the event from some of the panels that participated: 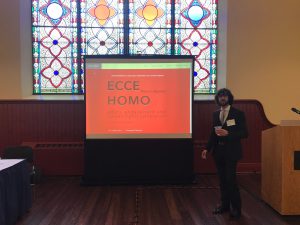 The Lessons from the Holocaust panel was successful in facilitating a robust conversation between presenters and an audience of students, professors, and community members. Dr. Luca Giberti’s talk, “A First Look into Stanley Kubrick’s Work in Preparation for Aryan Papers,” unpacked some of Giberti’s extensive research into the British director’s unmade screenplay. Dr. Giberti discussed the general ethical complexities of representing the Holocaust on screen, as well as the aesthetic strategies employed by Kubrick to negotiate those complexities. Dr. Giberti was followed by Dr. Polly Zavadivker (University of Delaware) whose talk was entitled “The Holocaust: A Human Story.” In her talk, Dr. Zavadivker explored the ethics of engagement with diary testimonials, ultimately making the point that these should be evaluated as historical documents produced by real, complex human beings. Exalting these documents in hagiographic or mythologizing terms, Zavadivker argued, constitutes an ethical transgression against the memory of the Holocaust as a human tragedy with authentic, complex victims. Dr. David Winkler’s talk “The Threat of Election from Below: Moni Ovadia on Holocaust Memory” sought underline meaningful selections of a personal interview he conducted with the Italian playwright Moni Ovadia in 2015. Dr. Winkler shared how Ovadia articulated an interpretation of Yiddish culture as possessing fundamentally anti-genocidal features, and used this information to deconstruct his fixation with exploring, staging, and exalting the aesthetic qualities of the Yiddish world in his artistic project.

A Middle East in Crisis and the Failure of Ethics (Moderator: Dr. Ikram Masmoudi)

“The third panel”A Middle East in Crisis and the Failure of Ethics” gathered scholars specializing in contemporary Middle East culture and politics who gave rich and enlightening insights on some of the pressing issues related to the human rights situation and the main conflicts tearing up the region of the Middle East from Syria to Iraq and Palestine.

The panelists included professor Dr. Miriam Cooke (Duke University) who presented talk on ISIS’s interpretation of religion-making ‘fatwa’ which infringe on women’s rights in Syria and Iraq; Dr. Kai Draper (UD), who helped untangle the situation of the conflict in Syria and the position of the American government; and Noura Erekat, a human rights lawyer and a professor at George Mason University, who shed light on the enduring human rights’ abuses in Palestine. The final presentation was by Dr. Ikram Masmoudi, co-organizer of the symposium and professor of Arabic, who focused on the fictional take on the Syrian uprising through Khalid Khalifa’s last novel Death is Hard Work.

The panel was well attended and a lively Q&A followed the panelists’ presentations.

In the final panel of the symposium, three scholars presented different perspectives on memory, trauma and post-dictatorship accounts in Latin America. Dr. Bernardita Llanos (Brooklyn College, CUNY) presented her research currently focused on women’s accounts on sexual abuse during imprisonment in Latin America. She was particularly interested in the works produced by female documentarians who revisit their past as political activists constructing alternative archives to the official memory accounts. Dr. Silvia Tandeciarz (College of William and Mary) focused on contemporary visual, spatial, and performative cultural initiatives in Argentina that serve to process and transmit traumatic memories of the last dictatorship. Dr. Gladys Ilarregui, of the University of Delaware, presented research conducted in England with a survivor of the last Chilean dictatorship. She examined the treatment of human rights from the perspective of colonialism, trauma, poetry, and the language of victims who have come forward to remember those darker political years.

Gladys Ilarregui and the students of her Human Rights Class, a 400-level Spanish course, contributed to the symposium by designing a mural. The students have been learning about different aspects of human rights in Latin America this semester. They incorporated different stories and messages that they have learned about throughout the semester. With the help of Barbara Romero Petidier and Fabio Santucci (Italian artist), the class designed a five-panel mural, each focusing on different human rights issues including censorship, women’s rights, and immigration on the Mexican-American border. One of the panels also featured the work of Argentinian artist Delia Tossoni and her piece “Mujeres de Lodtz,” a textile project that shows women’s clothing with the women removed. Ilarregui and her students hope that this visual representation of human rights will bring awareness to issues of human rights that are happening to people today. (written by: Anne Grae Martin, Span 415) 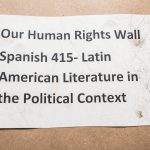 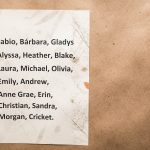 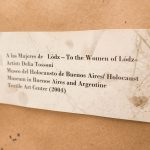 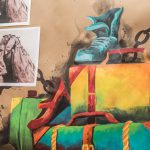 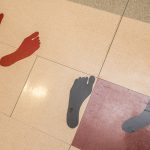 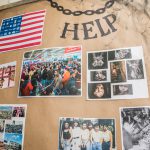 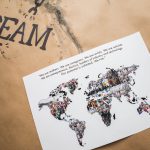 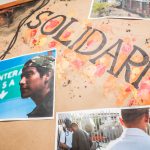