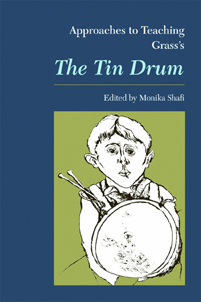 The career of Günter Grass began dramatically in 1959, with the publication of his first novel. The Tin Drum brought instant fame to the thirty-two-year-old author and led to his receiving the 1999 Nobel Prize in Literature. Translated into dozens of languages, the novel has sold over four million copies worldwide. Its status as a major text of postwar German literature, however, has not diminished its provocative nature. In both style and content, it continues to challenge scholars, teachers, and students.

This volume, like others in the MLA series Approaches to Teaching World Literature, is divided into two parts. Part 1, “Materials,” provides the instructor with bibliographic information on the text, critical studies, and audiovisual and Internet resources. Part 2, “Approaches,” contains eighteen essays on teaching The Tin Drum, including three that discuss Völker Schlöndorff’s 1979 film adaptation of the novel. Some of the topics covered are the historical context (Nazism, World War II, the Holocaust), Oskar Matzerath as an unreliable narrator, the imagery (e.g., eels, the Virgin Mary), the use of German fairy tales, and how Grass’s satirical treatment of Germany speaks to postwar generations.