Approaches to Teaching the Works of Carmen Martín Gaite 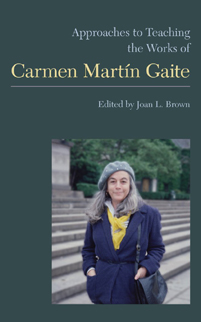 Approaches to Teaching the Works of Carmen Martín Gaite

The career of Spain’s celebrated author Carmen Martín Gaite spanned the Spanish Civil War, Franco’s dictatorship, and the nation’s transition to democracy. She wrote fiction, poetry, drama, screenplays for television and film, and books of literary and cultural analysis. The only person to win Spain’s National Prize for Literature (Premio Nacional de las Letras) twice, Martín Gaite explored and blended a range of genres, from social realism to the fantastic, as she took up issues of gender, class, economics, and aesthetics in a time of political upheaval.