Confronting Our Canons: Spanish and Latin American Studies in the 21st Century 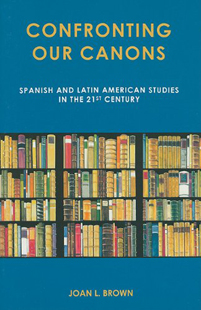 Confronting Our Canons: Spanish and Latin American Studies in the 21st Century

What is a canon and why does it matter? In Confronting Our Canons: Spanish and Latin American Studies in the 21st Century, Joan L. Brown shows that a canon has the power to define a field and determine what is taught. She argues that it is both productive and necessary to confront our canons, to see what is actually in them and how these works and authors got there. Only then can educators take charge of their teaching canons and, by extension, their disciplines. Brown demonstrates that there is little agreement in the reported teaching canons in English and Spanish. Analyzing twentieth- and twenty-first-century required graduate reading lists in Spanish and Latin American literature in the United States, she finds that the core literary canon for graduate students is less comprehensive than the Spanish Advanced Placement reading list for high school students. She encourages the field of Hispanic studies—curators of the cultural patrimony of our country’s second language—to take the lead in developing a diverse, flexible, shared foundational canon at the graduate level, before the arbiters of “best practices” do this for us.