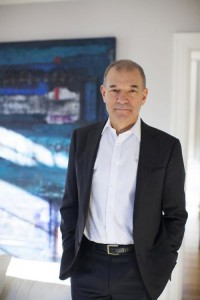 One of the world’s most celebrated scholars, Harvard professor Stephen Greenblatt crafted both an innovative work of history and a thrilling story of discovery. In this work, entitled The Swerve, he recounts how one manuscript, plucked from a thousand years of neglect, changed the course of human thought and made possible the world as we know it.

In his public lecture on November 12, 2015 at the University of Delaware, Dr. Greenblatt discussed how nearly six hundred years ago, a short, genial, cannily alert man in his late thirties took a very old manuscript off a library shelf, saw with excitement what he had discovered, and ordered that it be copied. That book was the last surviving manuscript of an ancient Roman philosophical epic, On the Nature of Things, by Lucretius—a beautiful poem of the most dangerous ideas: that the universe functioned without the aid of gods, that religious fear was damaging to human life, and that matter was made up of very small particles in eternal motion, colliding and swerving in new directions.

The copying and translation of this ancient book–the greatest discovery of the greatest book-hunter of his age–fueled the Renaissance, inspiring artists such as Botticelli and thinkers such as Giordano Bruno; shaped the thought of Galileo and Freud, Darwin and Einstein; and had a revolutionary influence on writers such as Montaigne and Shakespeare and even Thomas Jefferson.

For his authorship of The Swerve, Professor Greenblatt was awarded:

This was the Department of Languages, Literatures and Cultures’ Distinguished Lecture for Fall 2015. The event was co-sponsored by The Office of the Provost; the Department of Philosophy, The Class of ’55 Endowed Fund; the College of Arts and Sciences; Morris Library; the Center for Material Culture Studies; and the Department of English. 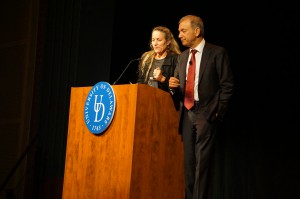 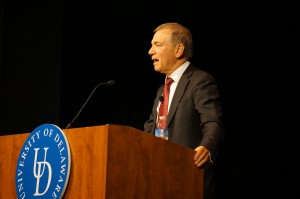 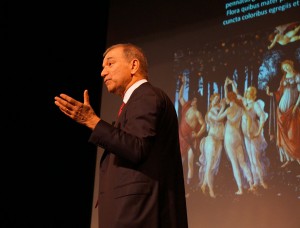 Stephen Greenblatt speaking about “Lucretius and the Toleration of Intolerable Ideas” 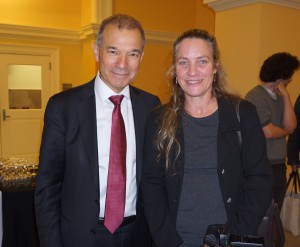 Stephen Greenblatt and Annette Giesecke at the reception after the lecture

This entry was posted in Polyglot, Special Events and tagged Ancient Greek and Latin, Fall 2016 Polyglot.