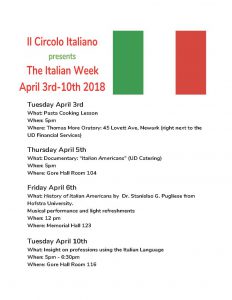 The Italian Week (La Settimana Italiana) was a very successful series of events that took place on our campus April 3rd and April 10th 2018.  It was organized by Dr. Riccarda Saggese, Associate Professor of Italian, and the Circolo Italiano (the UD Student Italian Club) and sponsored, besides the Italian Club, by the Departments of Languages, Literatures, and Cultures, Political Sciences and English.  The week was comprised of four different events.  April 3rd was dedicated to one of the most practical and material aspects of Italian cuisine, Pasta Cooking Lesson, at the Thomas More Oratory; on April 5th, in Gore Hall 104, a vast audience of students watched the documentary Italian Americans, preceded by performances of Italian music; Dr. Stanislao G. Pugliese, Professor of Modern European History and Queensboro Unico Distinguished Professor of Italian and Italian Studies at Hofstra University, delivered a lecture on The Ironies of Italian American History to a packed audience on April 6th; and finally, April 10th was Career night. Insight on professions using the Italian language (Gore Hall 116), devoted to the presentation, by UD seniors and alumni, of successful career paths enhanced by the study of Italian.  The acme of the week was touched with the lively and highly informative presentation by Prof. Pugliese.

Dr. Pugliese is the author, editor, or translator of fifteen books, among which the recent ground-braking volume The Routledge History of Italian Americans, co-edited with William Connell.  Prof. Pugliese offered an extensive and exhaustive panorama of the several ironies of Italian-American history that could be centered around three main ideas: the lack of national consciousness; the peculiarity of Italian Catholicism; the new Italian immigrants.  Italy has been united (and only partially) as a country only in 1861 and the Italian cultural identity, free from the XIX century concept of nation, is still evolving.  The big divide between North and South, still alive today, was a prejudice that Northern Italian intellectuals, such as Filippo Maffei and Lorenzo Da Ponte, instilled in the American ruling class in the early 1800’s: Thus, the distinction at the immigration stations such as Ellis Island and New Orleans between the Northerner Italians and the Southerners, treated basically as a different race.  The history of racism and marginalization towards Italian-Americans found its roots in these factors.  Second, the Italian Catholicism clashed not only against the American Protestantism, but first of all against the Irish Catholics, who couldn’t understand the “pagan” cult of the Saints and the Virgin Mary.  This sort of ironical weakness of the Italian-American Catholicism has been allegorically reflected, for instance, in the recent demolition (2017) of the Church of Our Lady of Loreto in Brooklyn, NY, a beautiful building designed (1906) according to the Italian architectural tradition and an important cultural center (on another ironical note, Pugliese highlighted the influence that had on the American intellectual experience the anti-Fascist positions of Jewish-Italians such as Carlo and Nello Rosselli, who were among the founders of the political movement “Giustizia e Libertà” based on the ideas of Gobetti’s Liberal Revolution).  Indeed, Catholicism and Protestantism were implemented by Pugliese as cultural and ideological definitions.  Along these lines originated one of the major conclusions of the lecture: the new Italian immigrants are like courageous Puritans, fleeing the main stream, still evolving, Italian identity.

This entry was posted in Other News, Polyglot, Special Events and tagged Fall 2018 Polyglot, Italian.