On languages, literatures and cultures: A Message from the Interim Chairperson

The importance of language in shaping and defining human civilization and culture has long been understood. Among those who, millennia ago, remarked on the power of language was Sophocles, the most distinguished of ancient Greek tragedians (5th century BCE). In the play Antigone, Sophocles notes what makes humans “wondrous”—that is, makes them at the same time awe-inspiring, clever, versatile, but also potentially dangerous. Chief among the attributes that makes them so is language, ‘phthegma’, followed by the capacity for wind-swift thought (‘anemoen phronema’). 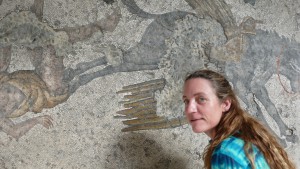 Language and its workings are, of course, fundamental to human communication through speech and literary expression. Both language and literature, in turn, provide critical insights into the workings and evolution of the earth’s diverse but increasingly interconnected cultures and social groupings, however they may be defined: geographically, spiritually, ethnically, and so forth.

The Department of Foreign Languages and Literatures has now officially changed its name to the Department of Languages, Literatures and Cultures. The change is a meaningful and timely one, and it is marked by an evolution of the Polyglot itself in both design and content. I invite you to browse its contents, which each in their own way, demonstrate the inextricable link between language, literature, and culture. For instance, in the pages that follow, featured literary texts are shown to shed light on scientific inquiry on the part of women in the Renaissance, corruption and crime in Latin America, and the effects of war on the contemporary population of Iraq; graduate student Karim Rebiai reflects on language barriers and their impact on personal and cultural expression; and recent graduates from our BA programs recount their transformative cultural experiences while working and traveling abroad.

I invite you, too, to visit our new Departmental website, where further DLLC news items, alumni news, academic program requirements, special events information, and an expanded version of the Polyglot are gathered.

Annette Giesecke, Interim Chair of the Department of Languages, Literatures and Cultures and Professor of Classics

This entry was posted in Message from the Chair, Polyglot and tagged Ancient Greek and Latin, Fall 2015 Polyglot.