100 Days Before the Command 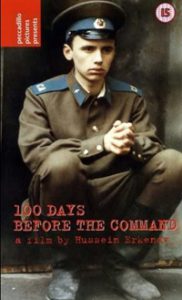 Five young Soviet Army recruits struggle for survival against the merciless violence that surrounds them on a daily basis. Their only means of saving their dignity is by preserving the humanity and compassion they share for each other. Visually astonishing, erotically charged and emotionally jarring, this film is Hussein Erkenov’s courageous and stinging indictment of Communisum. Banned by the Soviet censors upon its initial release the film had to be smuggled out of the country to make its world wide premier at the 1995 Berlin Film Festival.