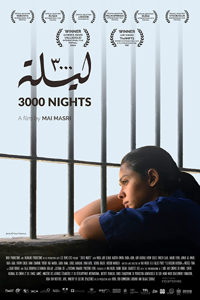 The story begins in 1980 Nablus, in the occupied West Bank, with the brutal, middle-of-the-night arrest of newly married schoolteacher Layal (Maisa Abd Elhadi). Her crime: giving a ride to a teenage boy who’s accused of executing a lethal attack on a military checkpoint. Under suspicion as an accomplice, she ignores the advice of her husband (Ahmad Al Omari), who urges her to lie during the trial, where she has a sympathetic Israeli defense attorney (Laura Hawa). Refusing to claim that the boy threatened her with violence, she’s sentenced to eight years in a prison that houses both Palestinians (political prisoners) and Israelis (convicted criminals).  Layal, who learns she’s pregnant soon after she’s locked up, is permitted to give birth to her child and raise him while incarcerated. That she chooses to have the baby rather than terminate the pregnancy, as both her husband and the warden (Izabel Ramadan) encourage her to do, is an act of defiance and an obvious stake in life and hope in the midst of grim surroundings. It’s a powerful metaphor in a film whose entire design is clearly symbolic.

An Israeli prisoner dubs the baby “another little terrorist” while Layal’s five Palestinian cellmates, who range widely in age, nurture and adore him. As a beautiful longhaired toddler, the boy, Nour (Zaid Qoda), is joy personified. He delights at the toys the women make for him from rags and the drawings that transform grimy walls into storybook illustrations.  Also taking an interest in the boy is Ayman (Karim Saleh), a fellow prisoner who happens to be a handsome, sensitive doctor. (In a lovely visual touch that’s also tinged with painful irony, the carved bird he makes for the boy comes to life for an instant.) With Layal’s husband having fled to Canada not long after her trial, Ayman steps into the drama as the all-too-evident Right One.