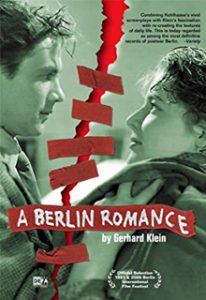 The film is a love story about a seventeen-year-old East German saleswoman named Uschi (Bürger) and an unemployed auto mechanic named Hans (Thein) from West Berlin. She leaves her familial home and moves into West Berlin, drawn by the brightness of the high streets and the economic progress in the West German side of the city. She initially dates Lord (Uwe-Jens Pape), a wealthy, leather-jacket-wearing ladies man, highly conscious of his own self-image and style. He is strongly influenced by American movie heartthrobs of the times.

Meanwhile, she meets Hans, an auto mechanic who, also image-conscious and aspiring to be trendy, is living in relative poverty and is considered less physically attractive than Lord. Although initially mesmerized by the glamour of West Berlin and Lord, she falls in love with Hans, deciding that looks and image are not important. She eventually returns home to her parents along with Hans, who finds a job in the Eastern side of the city.