A Coffee in Berlin 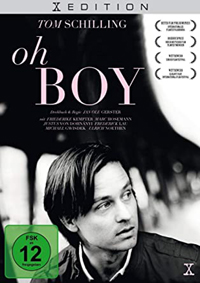 There’s a sharp commentary at the heart of writer-director Jan Ole Gerster’s debut feature, “A Coffee in Berlin” (originally titled “Oh Boy”), which swept up many of the major German film awards last year. It tells the story of Niko (Tom Schilling), a twentysomething guy who has dropped out of law school, failed to inform his father of that fact, and yet still accepts the father’s funding for the schooling that no longer exists. “A Coffee in Berlin” has some funny things to say about the “younger generation” and its prolonged adolescence, its putting-off of dealing with serious matters. With themes reminiscent of “Frances Ha,” down to its being filmed in black-and-white, “A Coffee in Berlin” presents a day or so in the life of Niko, as he careens from one absurd interaction to another, clearly floundering, but still not seeing that it is up to him to create the life he wants. Not tomorrow, but right now.

Niko is thwarted throughout the film in his quest to get a cup of coffee. The coffee machine is broken, or the vending machine is out of order, or the urn is empty, or a simple cup of coffee costs over three Euros. As “A Coffee in Berlin” goes on, the lack of coffee becomes emblematic of the feeling that the world is somehow massed against him. His relationship with his dad is horrible, his finances have been cut off, Roly Poly Julia has some potential but maybe she is as nutty as everyone else, and Niko can’t seem to get a foothold on meaning, relevance, or action. The continued running gag of no coffee gets an enormous emotional payoff in the film’s contemplative final moment.