A Flight of Hope 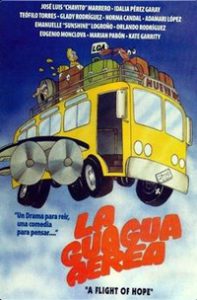 A comedy narrating the adventures of ten Puerto Ricans looking for a better life. The film centers on an airplane trip to New York during the 1960’s. It relates in a comical, yet poignant manner, the array of reasons each of the passengers has for leaving Puerto Rico and the challenges they face as suggested by the interactions of the Anglo crew and the passengers.