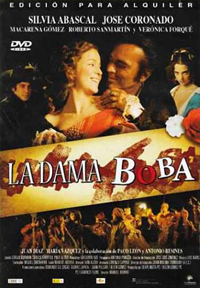 Intellectual Nise and her seemingly featherbrained sister Finea are in need of husbands – a situation their mother has well in hand.  It’s the penniless poet and cavalier Laurencio for Nise, and the vain Liseo for Finea… until Laurencio learns about Finea’s generous dowry. Wit and romance abound in Manuel Iborra’s effervescent film adaptation of the classic La Dama Boba by Lope de Vega.  Jose Coronado, Silvia Abascal, Macarena Gómez, Veronica Forque, and Roberto Sanmartín star.  A heartfelt exposition on the nature of identity and the transformative power of love.