A Question of the Heart 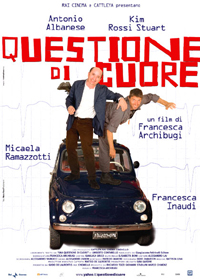 Alberto’s and Angelo’s “engines seized” on the same night. Angelo is a young body shop owner from a very poor background who has done a bit of everything and finally made something of himself. Alberto, a successful screenwriter, crazy, loud-mouthed and clumsy as a rhinoceros, initially does not get the reference. They become friends in the emergency room. They connect instantly, and no one is more surprised than they are that they understand each other so completely. But they are men, and thus they often disguise their emotions behind jokes and jibes. Just like teenagers on their first camping trip. Once they have left hospital, life seems so different: they are conscious of every heartbeat, and they find they need each other. Staying together means being with the only person in the world who – at that moment – understands them. Alberto, who is instinctively a loner, is unable to commit to his girlfriend and has withdrawn like a hermit crab into his shell, which in this case is Angelo’s house, right above his body shop specialising in classic cars, located in the Pigneto neighbourhood of Rome. It is an inscrutable world, at times wonderful, at others sinister. But in that house there is a family: Angelo’s wife, Rossana, voluptuous and pregnant with their third child, a kind of woman to the nth degree; and two children, Perla and Airton, an angry adolescent girl and a little boy agitated by recent events. Alberto begins to relax in the comfort of an atmosphere that is not only new to him but also something that he never wanted.