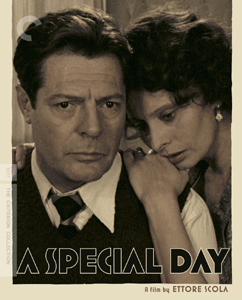 In Rome, fascist supporter Emanuele (John Vernon) attends a parade commemorating Adolf Hitler’s historic meeting with Italian leader Benito Mussolini, leaving his apolitical wife, Antonietta (Sophia Loren), to tend to household duties. Antonietta encounters a man, Gabriele (Marcello Mastroianni), who appears surprisingly nonplussed by the political event. Over the course of the day, the two forge a close friendship that will forever change their perceptions of life, love and politics.  Though A Special Day is set in Rome on the historic day in 1938 when Benito Mussolini and the city first rolled out the red carpet for Adolf Hitler, the film takes place entirely in a working-class apartment building, where an unexpected friendship blossoms between a conservative housewife and mother tending to her domestic duties and a liberal radio broadcaster awaiting deportation.  Scola paints an exquisite portrait in muted tones, a story of two individuals helpless in the face of Fascism’s rise.