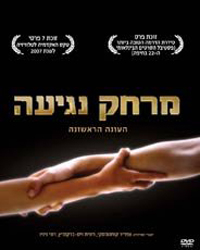 A Touch Away is a 2006 Israeli drama television miniseries set in Bnei Brak, a city to the east of Tel Aviv, within the larger Tel Aviv District, in Israel.  The drama series revolves around a hopeless love story between an orthodox religious young woman and a Russian immigrant. The lives of two families interconnect in an apartment complex in the orthodox neighborhood of Bnei Brak, just outside Tel Aviv. The Bermans are a strictly religious family, whose daughter Rochale is about to enter into an arranged marriage with a wealthy young bridegroom. But sparks fly when a thoroughly secular family from Russia moves into a neighboring apartment. The forbidden love that soon blossoms between the two young neighbors, and the secrets that each family must hide, threaten the families deeply rooted traditions and challenge individual family member’s beliefs.