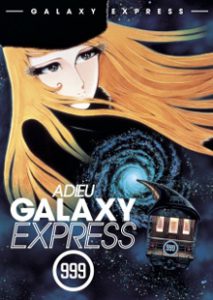 Adieu Galaxy Express 999 is a 1981 sequel to the film adaptation of Galaxy Express 999.  Adieu presents an entirely new story line which takes place three years after the destruction of Planet Maetel. The Machine Empire now has even more of a stranglehold over the Galaxy. Rumors are afoot of Maetel becoming its new Queen. Tetsuro, now a fifteen-year-old freedom fighter, is shocked when a messenger brings him news that the 999 is returning, and that Maetel wants him to board it. Tetsuro narrowly makes his way to the 999 and departs Earth, now a battlefield.