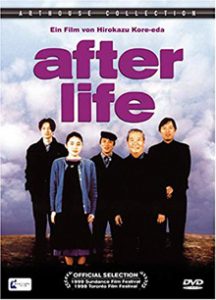 After people die, they spend a week with counselors, also dead, who help them pick one memory, the only memory they can take to eternity. They describe the memory to the staff who work with a crew to film it and screen it at week’s end; eternity follows. 22 dead arrive that week, assigned to three counselors and a trainee. One old man cannot find a memory, so he watches videotapes of his life. Others pick their memory quickly, and the film crew gets right to work. The trainee, 18-year-old Shiori, helps a teenage girl choose a memory other than Disneyland. The youthful staff have a secret and feelings, too, which play out, especially Shiori’s affection for her mentor, Mochizuki.