Agony: The Life and Death of Rasputin 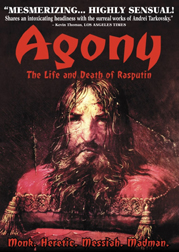 Agony: The Life and Death of Rasputin is a 1981 Soviet film by Elem Klimov.  It details the life of the Russian monk Rasputin. The film shows his rise to power and how it corrupted him. His sexual perversions and madness ultimately lead to his gruesome assassination.