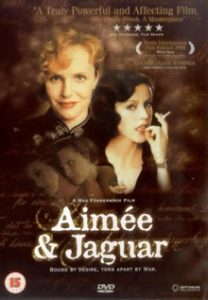 In 1943 Felice, assuming a false last name and working as a journalist at a Nazi newspaper, meets Lilly via her friend and sometime lover Ilse, who works as Lilly’s housekeeper. Instantly smitten, she takes the initiative in the love affair by sending flagrant letters to Lilly and signing her name as Jaguar, much to Ilse’s dismay. One fateful afternoon Felice, Ilse and their friends Klara and Lotte are accosted by German soldiers. All but Lotte manage to escape. After Lotte is shot dead by the soldiers, the friends find no identification on her body except a photograph of her and Felice. Lonely due to the constant absence of her husband, Lilly engages in a series of affairs with other men, but is disillusioned by her callous treatment at the hands of her latest lover, another Nazi officer. She grows closer to Felice, who attempts to kiss her during a New Year’s Eve Party in her Berlin apartment after Lilly discovers her philandering husband with Ilse. Lilly rejects Felice but, as her husband tries to make amends the following morning, Lilly realizes she has never loved him and reconciles with Felice.

After the July 20th attempt on Hitler’s life, Felice and her friends fear for their lives and arrange to flee Germany before they are rounded up. At the last moment, Felice decides to stay in spite of the danger so that she may remain with Lilly. After a day of frolicking in the countryside, the two return to Lilly’s apartment, where Felice is captured by the Gestapo, who have identified her through the photograph of her and Lotte. She is sent to Theresienstadt concentration camp, from where she still manages to correspond with Lilly, but all contact is lost by the end of 1944.