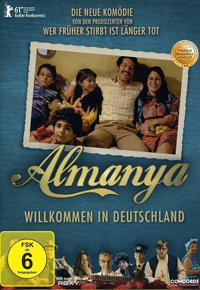 After working for 45 years in Germany as a Turkish Gastarbeiter, or guest worker, Hüseyin Yilmaz, now in his 70s, announces to his family that he has bought a house in Turkey and wants everyone to go back with him to renovate it. The family is not enamoured with the idea and a heated debate ensues. Adding fuel to the fire is the revelation of granddaughter Canan that she is pregnant from her English boyfriend, whom the family has no idea about. In order to comfort her six-year-old cousin Cenk, who was bullied on his first day at school for being a “foreigner,” Canan tries to cheer him up by telling him the fantastic story of how and why they all ended up in Germany, even though they aren’t Germans. They undertake a journey back in time to a wondrous place where a small Turkish family discovered a land populated by blond giants who ate pigs, where big rats on leashes were taken on walks, where water was called Coca-Cola, where people worshiped a little wooden figure on a cross, and where everyone spoke “gibberish” – a land called ALMANYA!