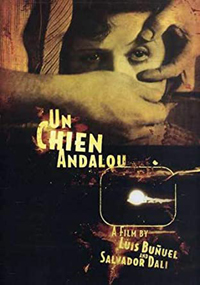 Un Chien Andalou is a 1929 Franco-Spanish silent surrealist short film by Spanish director Luis Buñuel and artist Salvador Dalí.  It has no plot in the conventional sense of the word. With disjointed chronology, jumping from the initial “once upon a time” to “eight years later” without events or characters changing, it uses dream logic in narrative flow that can be described in terms of the then-popular Freudian free association, presenting a series of tenuously related scenes.  It is regarded as the first film produced purely from within the Surrealist Movement, and a landmark in the history of cinema.