Apples From the Desert 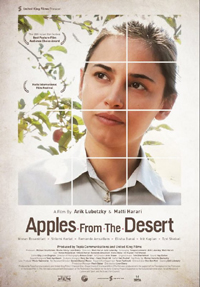 Inspired by the award-winning play of the same name, this poignant drama centers around Rivka (Moran Rosenblatt), the only child of Ultra Orthodox Jewish (Sephardic) parents from Jerusalem, who begins to secretly explore the secular world. She befriends Dubi (Elisha Banai), a young man from a kibbutz. When Rivka’s strict father (Shlomi Koriat) discovers her plan to abandon their community, he arranges to marry her off to a widower with children. Rivka’s reserved mother (Reymond Amsalem) is caught between her sense of duty to her husband and her desire to see Rivka happy. This timeless story confronts issues of tradition versus modernity, and the question of whether these two generations can reach reconciliation.

The tensions in the real world between Orthodox Jews and secular Jews in Israel are palpable, and are only getting worse with each passing year (due to higher birth rates, Orthodox Jews continue to grow over the years as a percentage of Israel’s overall population). As Rivka comes into contact with the world outside of her Orthodox Jewish community, we see she is genuinely shocked when her new friend has no mezuzah on his door, and the food he serves is not kosher. The film makers do a great job showing us the strong bonds that Rivka has with her religion, even if that religion has more or less forced her to run away from home so as to try and make a life for herself. Another interesting character in the movie is Rivka’s aunt (Victoria’s sister), who never married and dreams of going to visit Venice one day. But the most tragic character is surely Victoria, who is between a rock and a hard place as both the wife of Reuven and the mother of Rivka. When Rivka asks her mom “why are you letting him do this to me? is this all I am worth to you?”, just watch for Victoria’s reaction. Heartbreaking.