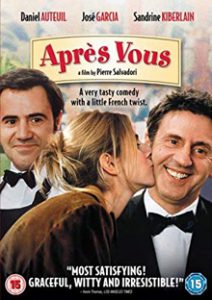 Antoine is a maitre d’ in a Paris brasserie, Chez Jean, and is so full of being of service to others that he can’t say ‘no’. Late for dinner with his girlfriend, Christine, he takes a shortcut home through the park but finds a stranger, Louis, in the act of committing suicide by hanging. Louis is distraught by the loss of his girlfriend, Blanche, and is so grateful that he attaches himself to Antoine. Antoine arranges a job for Louis – as a sommelier at Chez Jean and sets about trying to repair Louis’ life…