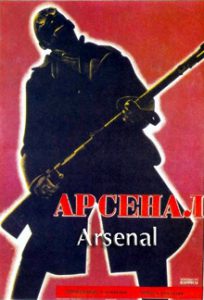 Set in the bleak aftermath and devastation of the World War I, a recently demobilized soldier, Timosh, returns to his hometown Kiev, after having survived a train wreck. His arrival coincides with a national celebration of Ukrainian freedom, but the festivities are not to last.  The film is a montage of images that depict the social upheaval in Russia following World War I leading to the Russian Revolution.