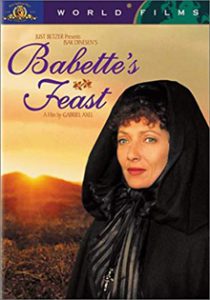 In a remote 19th-century Danish village, two sisters lead a rigid life centered around their father, the local minister, and their church. Both had opportunities to leave the village: one could have married a young army officer and the other, a French opera singer. Their father objected in each case, and they spent their lives caring for him. Many years later – their father is now deceased – they take in a refugee from France’s civil war, Babette Hersant, who agrees to work as their servant. After winning the lottery, Babette wants to repay the sisters for their kindness and offers to cook a French meal for them and their friends on the 100th anniversary of their father’s birth. It proves to be an eye-opening experience for everyone.  Her feast, of course, scandalizes the local elders.  Just who is this strangely talented Babette, who has terrified this pious town with the prospect of losing their souls for enjoying too much earthly pleasure?