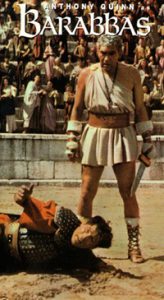 Barabbas is a 1961 religious epic film fictionally expanding on the career of Barabbas, from the Christian Passion narrative in the Gospel of Mark and other gospels about the criminal who was released by Pontius Pilate in preference to Jesus, prior to the Crucifixion. The action follows Barabbas after his lucky escape, his return to crime and his subsequent recapture and imprisonment in the sulfur mines. Although he is set free, the event is one that haunts Barabbas for the rest of his life.  After watching his former lover, Rachel, being stoned to death for her belief in Jesus, Barabbas returns to his life of thievery.  Arrested again, he is sent to the sulphur mines and then to a gladiator school where he witnesses yet another friend give his life in the name of the Nararene.  It is only at the end, when Barabbas himself faces crucifixion, that he discovers his faith.  The film is based on the novel by Swedish writer Par Lagerkvist.