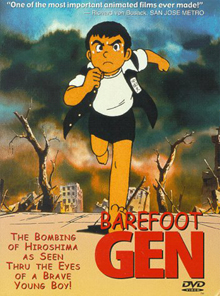 Gen and his family are living in Hiroshima as Japan nears the end of World War II. Gen’s father has come to believe that the war is unwinnable, thus earning the wrath of the town officials and, in turn, discrimination from the rest of their neighbors. Shunned by the local merchants and tradesmen, food becomes scarce for Gen and his family. All these concerns soon pale, however, as the American military begins its final assault on Japan with the unleashing of its terrible new weapon.