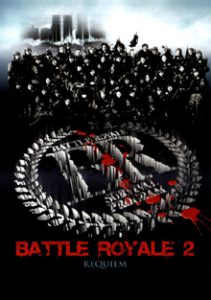 Three years after the events in “Battle Royale,” the survivors of previous Battle Royales have formed a rebel group called the Wild Seven, led by Shuya Nanahara. A class of ninth graders, composed of “a ragtag collection of delinquents and losers”, are kidnapped by the authoritarian Japanese government. Many of these students are orphans whose parents or family have died in bombings by the Wild Seven. After their school bus is diverted to an army base, the students are herded into a cage, surrounded by armed guards, and confronted by their schoolteacher, Riki Takeuchi, who lays down the ground rules of the new Battle Royale game.

Instead of being forced to kill each other, as in the old Battle Royale, the students are sent off to war and ordered to attack the Wild Seven’s island hideout en masse and kill Shuya within 72 hours. Most of the students are not interested in being forced to avenge their families, but they are coerced to fight through exploding metal collars, which their captors can detonate by remote control. Takeuchi shows them a line in the caged classroom: those who wish to participate are instructed to cross the line, while those who refuse to participate will be killed. The students are put into “pairs”; if one student dies, then his or her partner will be killed via collar detonation.