Bauhaus: The Face of the 20th Century 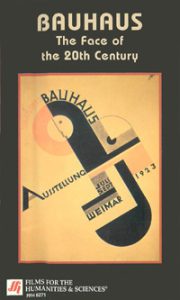 This stunning program looks at the development of the Bauhaus and at the key figures involved in it—including the founder Walter Gropius, his successor Mies van der Rohe, László Moholy-Nagy, and Josef Albers. The program also sets the history of the Bauhaus in the context of the political unrest and economic chaos of the Weimar Republic in Germany. The program features numerous experts including Christopher Frayling of the Royal College of Art, architectural historian Charles Jencks, and Dr. Peter Hahn, director of the Bauhaus Archive in Berlin. Former students discuss their time at the Bauhaus, and the eminent architect Philip Johnson tells how it influenced his work. The program contains rare archival footage of the Bauhaus at Dessau and looks at the architecture of Chicago, much influenced by Mies van der Rohe, who emigrated there after the Bauhaus was shut down by the Nazis in 1933.  (In English)