Because of That War 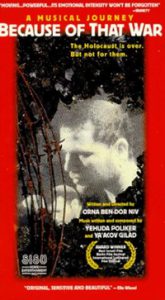 Because of That War is the first Israeli film to explore the life experience of the Holocaust generation and its own second generation – children born in Israel, who grew up in the shadow of their parents’ memories of the Holocaust. Orna Ben Dor’s sparse documentary focuses on two well-known Israeli rock stars: Yehuda Poliker and Yaakov Gilad. The two produced “Ashes and Dust,” an Israeli New Wave album dedicated exclusively to the Holocaust. The film inter-cuts songs from the album with a series of poignant conversations with the artists and their survivor parents. Shot in eight days, it has a raw and emotional intensity that has made it one of the most talked-about films in Israel.