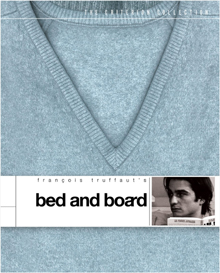 Antoine and Christine have gotten married and are living in a pleasant apartment that her parents have found for them. In it she gives violin lessons, while he works in the courtyard dyeing carnations for flower shops. When his experiments with coloring agents go horribly wrong, he has to find other work. An American company hires him to demonstrate model boats to potential customers in a mock-up harbor. In the meantime, Christine has a baby boy, which she names Ghislain. At work, Antoine meets a Japanese girl, who invites him for a meal at her apartment. An affair ensues, which Christine becomes aware of when she finds little hidden love letters. Antoine is banished from the bedroom and eventually moves out to a hotel, while Christine makes a life for herself and the baby. Antoine, bored and restless in a pointless existence, keeps telephoning her and in the end she is ready to take him back.